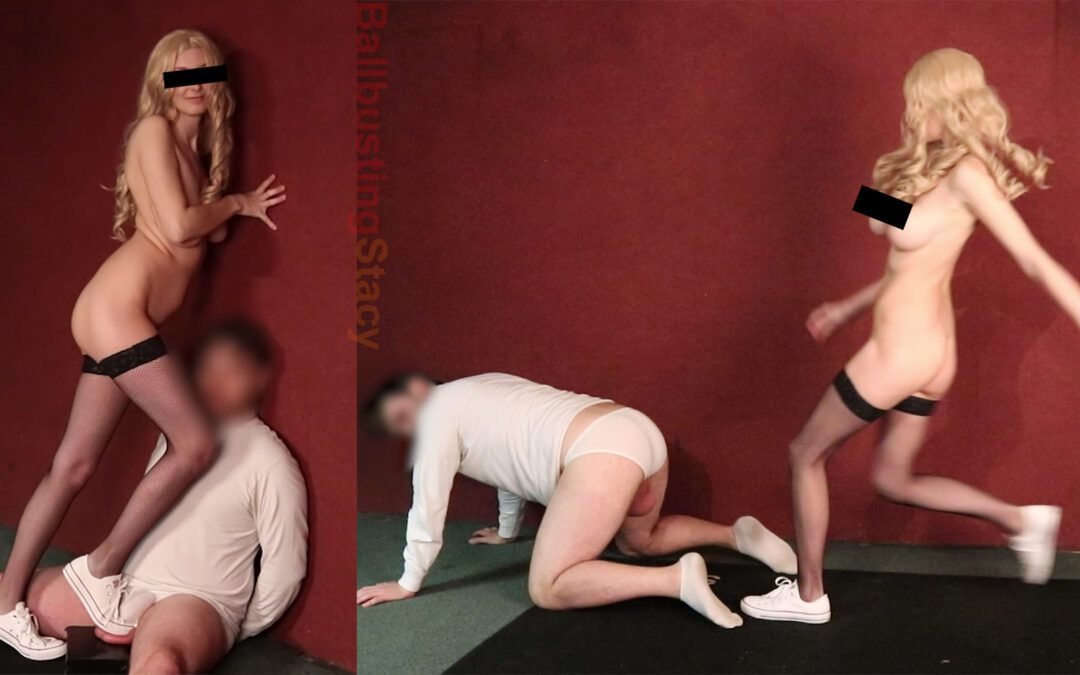 I’ve just released my first fully nude ballbusting video, which is pretty exciting by itself right? Well I say completely naked, but actually I’m wearing hold up stockings and shoes 😅

Most of you guys have not seen me completely naked before, as that type of content is usually reserved for my special OnlyFans boys. But you’ll be pleased to hear that I have a nice body and I’m very comfortable prancing around naked, especially when I’m kicking some balls as target practice! My body is slim yet curvy, with pale, soft skin, no marks, no tattoos, 100% natural! Oh yeah and my boobs are rockin’ 😉

But that’s not all! This new video is a doozy for a few other reasons, namely that it includes some things I haven’t caught on film before, namely:

Full weight ball standing/jumping until he spontaneously orgasms all over my shoes!

Wow wow wow! This video is also a huuuge 32 minutes long, which is the length of my usual in-person ballbusting sessions, so you can just sit back and relax from the comfort of your sofa, and let this silly slave go through the horrible yet sexy ordeal of having an intense naked session with BallbustingStacy.

Human testicles are just endlessly fascinating aren’t they? They can go through so much, and end up probably being fine afterwards. Have you ever just stared your testicles dangling down there? I’m not sure if you’re aware of this, but they move by themselves, up and down. Constricting, and relaxing. All the delicate little cremaster muscles serving so diligently to pull the testes up and down, drawing them closer or letting them dangle just a little bit farther down, trying to get in the perfect position to assure your spermies are at their optimal temperature. In many ways your dangly cum-luggage is a wonder of nature. Which is another reason why it’s so hilariously cruel for me to treat your stupid vulnerable sacs like a my own personal target practice, throwing whatever I can at them to see how they’ll react.

All the boys it’s happened to with me were all apologies and suddenly didn’t want to continue doing anything else, they were probably embarrassed. It’s not very embarrassing for me, but its sometimes a little surprising, because it’s a pretty rare occasion! Which is why I was happy when I caught the mysterious phenomenon all on film.

What I found especially shocking was that because I’ve beaten this guys balls a couple of times before, I thought I had figured out all his ball-quirks, but it turns out that abusing testicles like a psycho can bring with it fun biological surprises if you do it often and hard enough. (Also trying out different ballbusting methods can bring different results).

I was jumping on his balls, in my brand new white low top converse shoes, which had hard inflexible rubber soles. I was really bouncing, jumping, stomping and twisting on top of his testicles and he was screaming so loud. The whole time I was thinking “It’s only your balls dude, relax. Just let me use your babymakers as a fucking bouncy castle and shut the fuck up!” I was also worried that some people would complain about strange noises coming from the room! Like, was someone in pain? Was their life in danger? What’s going on in there? Nah, it’s just me stepping on some balls, no need to panic everyone!

To stop him making any more annoying screams, I stuck my naked ass right in his face. I shoved my cherry scented naked pink butthole right on his lips and nose so he couldn’t breath and it worked like a charm. Now he was screaming directly into my butt and I could get on with my work of literally pulverising his testes.

Speaking of testes, they were getting redder and swollen and the balls were getting squishier and flatter. I was wearing these heavy flat shoes so I couldn’t really tell if I was permanently damaging them underneath my weight or not as I couldn’t really feel them at all. When you wear shoes it’s much harder to know if you’ve popped a ball or if one is getting ready to burst etc, when a nice lady is barefoot and crushing your balls under her heel it’s much easier to feel the delicate veined orbs getting closer to their breaking point.

After lots of ball stomping, standing and squishing, he must have felt like his balls were about to die as he started getting an erection! Wa-hey! This was amusing but in no way did it deter me from beating his balls like a jealous housewife. I kept marching on with my ball-standing stomps, feeling like nothing could stop me, when all of the sudden he fucking came all over my nice, shiny new Converse! Oh you fucking son of a bitch!

This session/video had suddenly taken an astounding turn. It was now a hands-free, ball stomping ejaculation video, which is a quite a corker.

We took a little break and then cracked on with some more ballbusting, this time, a good ol’ fashioned 15 minutes of full-force Stacy kicks straight into his delicate dangly and EXTRA sensitive post-orgasmic nude testicles. These include 100% power boots in the nuts, from a running start like I’m punting a penalty kick, to really cool lifts-him-off-the ground crotch slams with him on all fours.

Every woman knows that the male testicles are much more sensitive to touch after a boy has splooged his goo. Not only that, but all desire for ballbusting seems to dissipate and all he wants to do is curl up and snuggle, or at least go home and cogitate upon his shame. No boy wants to cum and then get his gonads kicked about like a football, but this slave signed up for the ride, so I beat the living FUCK out of his post-cum balls. This was pure post-cum torment and I’m personally pretty happy with the outcome. It was so fun to film too! And the ‘being naked’ element really added to the whole experience, especially in regards to feeling physically superior to men 😉

Sudden pain-cums during ballbusting, have they happened to you? Are they pleasant or not enjoyable? Let me know in the comments!

By the way in case you didn’t know, if you don’t have any ballbusting toys, you’re missing out. It’s an exciting and fun way to introduce ballbusting to your relationship or even just to enhance your solo explorations.