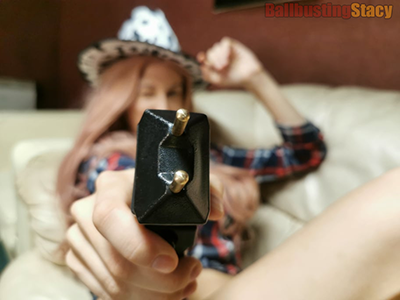 I have a ballbusting bucket list of experiences I want to try, among them is: shooting balls with a paintball gun; smashing balls with an aluminum bat; and last but not least, tasering balls mercilessly. Then one day I thought, why not get a taser and make a fun video for my Onlyfans?

So, after some obsequious Twitter begging, a nice ballboi went onto my amazon wish-list and gifted me a high powered cattle prod that I had my eye on. While I was waiting for it to arrive in the mail I was frothing at the bit to try it out on some poor ballfool. (Sidenote: if someone gets me something off my wishlist I usually model it at some point. Stacy always needs new outfits and toys!)

This blog post will give you insight into what I was thinking as I went about our short yet intense session of nut electrocution.

First I get dressed up in my tiniest pair of denim cowgirl shorts, that barely cover my bum. My legs go on for miles and miles, and it’s hot out these days, so it’s nice to be able to stay in theme and stay cool. I thought “cowgirl” because of, you know, the cattle prod. Of course, I had wear a check flannel shirt and a cowgirl hat too.

I set up the cameras and sat on top of my slave, who I’d dressed up as a bunny rabbit and looked humiliated and ridiculous. I brought out my taser and thought, we’d better get the show on the road! I grabbed his stupid goolies and scrunched them up tightly in my leather gloved hand. Probably just squeezing his balls like this was a shock to his system. A lot of things I do to testicles without even thinking about it can often be so painful to a ballbusting noob that they have to stop the session before I’ve even gotten started… but I digress!

I was wearing a thick wool lined leather glove to protect myself from the electrifying shocks I was about to give this fella. You see, the shock of this cattle prod is apparently so immense that if a lady doesn’t wear gloves she risks the shock traveling through the testicles and into her hand, albeit at a much diminished voltage by the time it gets there. But even after the shocks had traveled through his testicles and scrotum it was still potentially strong enough to sting like an absolute bitch, probably feels akin to someone stabbing you really hard with a very sharp fork. That’s with his balls as a buffer! So definitely gloves for me, thank you!

Ooops! I shocked his balls on “Two.”

The electricity arced straight into his scrunched nuts with a loud crack, a mini lightning bolt which shattered the silence of the room, as I pressed the prongs hard into the center of the worthless living nutmeat. The chaotic electricity dissipated into his millions of nerve endings, each one sending his brain a dire warning that his balls were on fire.

Another fun thing about a cattle prod is that, according to literature, it feels very much like being hit with a baseball bat at full force. Depending on which nerves get struck by the massive jolt, the sensation of searing pain and soreness can last hours. When it’s done to testicles, I can only imagine the utter agony it must induce, which lasts and lasts.

I’m instantly loving my taser. It’s so easy to do! It takes almost no effort for a nice lady like me, to completely and utterly incapacitate a man instantly with this thing! Since I tricked him and zapped him on “Two” he was totally unprepared for the pain. I like boys being nice and relaxed before I send him into testicle hell. That way I can see and feel their true, pure reaction to my evil ball experiments

In a fraction of a second the information that he had been ball-shocked traveled up his spine and hit his cerebral cortex. He screamed out so loud it hurt my ears, and he bucked involuntarily, so much so that he actually shook me off of him. He also shoved me away by grabbing my butt! VERY naughty. This bunny rabbit had to be taught a lesson, never to touch a lady without permission, even when their balls are getting viciously tasered! 😉

He rolled around on the floor desperately clutching his spasming dick & balls, then curled into a tight fetal position. He seemed to be trying to retreat into his own body like some peculiar human snail. I was deep belly laughing at him. He looked completely absurd with his stupid mask and bunny ears, crying into the floor.

It’s the same reaction I always get you know, whether I’m causing a slaveboi to sing soprano with a running kick into his dangling testicles, or trying to rupture a perv’s single worthless testicle with a lemon squeezer. Regardless, it’s always so funny to see the boys retching on the ground, crying and defenseless.

Depending on their level of comfort with ballbusting, sometimes it only takes the tiniest backhanded slap (pathetic). I love all of it though. That being said, this cattle prod was different, from where I was standing, the boy was behaving exactly the same as past instances when I’ve caused potential damage to a testicle. He was instantly reluctant to continue. He even said it was too painful! I told him we had to continue, because my viewers don’t want to see a boy pussy out after just one scrotum shock, that’s boring! I slapped his big dumb butt. I said, “You knew what this was gonna be when I said, “Tasing balls” so don’t be a pussy, loser.” He was going to shut the fuck up and take it like a grown up ballboi. In my experience, it’s best when you don’t give boys the option to stop. They’re such big babies when it comes to their balls, it’s always like, “Please can we stop mistress, this is the worst pain I’ve ever felt in my life… “NO we may NOT!”.

I was a teensy bit kind to him though. I let him rest for a bit, and catch his breath. I wandered around in my cowboy boots and patted him on his thigh. He looked in such pain that I didn’t even kick his balls while he was down, which is something I love to do if you’ve seen my other videos! That’s the best time to smash them, while they’re still reeling from the pain. He just kept rolling around and around, dropping the occasional pleading request for me to stop. Don’t worry, I got him back up for more, and pried his hands off his newly terrified genitals. I gave him a few requisite ball-squeezes. He yelped accommodatingly. Now he was ready for my second ball-xperiment!

Under my perfect butt I could feel him shivering with fear, just how I like men to be. The air was filled with his obvious stress and distress. If his balls had eyes, they’d be big puppy dog eyes begging me to leave them alone. LOL.

For my next trick, I picked up his nuts and stretched them out over a black block. I began to feel around for his precious testicle cords connecting his deep innards with his outie testes. These cords, as you may know, are the lifestream of the testicles and every single nerve ending in a set of big juicy balls travels up through them, not only that but they’re filled with rich veins and the incredibly sensitive and delicate spermatic ganglia. While the testicles themselves have a lot of sensitive spots, all sensation is filtered through this rich plexus of nerves in the cords. It is my understanding that if you have a taser and you want to absolutely wreck a boy, like I do, then the most serious and torturous pain happens when you jab the prongs into this fun zone.

This is exactly what was about to happen. Now, there’s no need to tell the dumb slave any of this. I do all my research about testicle torture beforehand so I can perfectly encapsulate the most evil testicle torturer on the Internet. Besides, he can read about it in this blog if he ever recovers. The important thing was that I explained everything cursorily, as I went along. I described what I was doing into the camera and I could feel him tensing up, his mind desperately trying to brace for a pain so great it was almost unimaginable. The sort of pain in the testicles akin to an industrial accident, or in 3rd world countries which don’t observe the Geneva convention. Perhaps he was trying to get his head into to a safe, happy place, to stare at the ceiling and convince himself he was walking on the beach or something. Even for a fan of ballbusting, this pain was going to be a little much!

This time I didn’t want him pushing me off of him like a naughty boy, so I made him sit on his hands for starters. I pulled his balls away from his body as far as they would go and stretched them out on the black block like I was tanning ball-hide. I located his fragile nut strings. I wanted him as relaxed as possible so I could get him right exactly on the testicle cords sweet spot.

I deep fried his spermatic plexus on “ONE!” Whoopsie 😉

However this time I was prepared for a thrilling bucking bronco ride! He screamed perhaps as loud as he had in his life. He thrashed and shook, but all his weight was already on his hands so he couldn’t push me off. I was dying laughing but I smushed his nutsac deep into the black taser, and watched his whole body go into submission, simply through his gonads, in a matter of moments. I pressed them so hard as I rode out his bouncing and flopping that his screams turned into whimpers and then, it almost sounded as if he was crying…  After a couple minutes I realized his crying had turned into a sort of strange manic laughter. It seemed as though he’d completely lost his mind. This kinda of ballbusting can have all kinds of side effects!

Now this whole textual account of Miss BallbustingStacy’s assault on the testicle cords is only about 6 minutes into the video, but the whole video is 16 minutes long! There’s so much in this video that if I described the whole thing it’d be like 15 pages long! So let’s cut it off here.

Suffice to say, the Special Onlyfans Edit of the video (6 mins) is available complimentary on my Onlyfans.