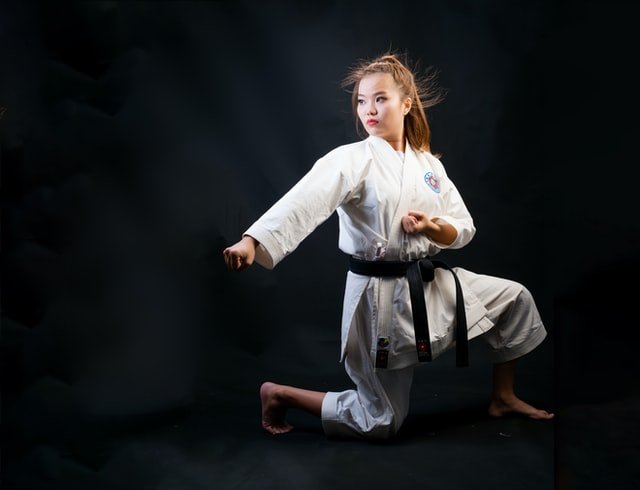 Written after popular demand, we explore female martial artists who have either accidentally or on-purpose, landed a fierce blow into a their male opponents crotch and discuss the nature of ballbusting karate.

I’ve heard many stories over the years from real women who, in a non-sexual context, have told me about how they have demolished boys’ balls with shocking brutality and effectiveness, while everyone around them watching the fights, cheered, applauded and laughed. I’m speaking of course of women who are well practised in martial arts, whether as a hobby or as a professional career.

If you’ve ever taken martial arts lessons you are perhaps familiar with the type and how it all works. Not all martial arts women will go for the testicles, but the ones who do develop a distinct reputation in their community.

“Gah, don’t fight Cindy without a cup dude, trust me,” one boy will furtively say to the next. The tinge of ball-fear clear in his voice as he says it. Once a boy has been properly cup-checked in public by a woman in sports, he never quite forgets it.

Often I’ll ask a male ballbusting friends, how did you get into having a woman turn your nuts into chunky peanut butter? I’ve heard a lot of stories, usually from experiencing or seeing some form of testicle trauma in their developing years. But I have to admit that some of my favourite tales are the ones that take place in your friendly neighbourhood karate dojos. The women are all different types, petite divorcees, athletic teens, bored housewives… the list is as long as your imagination, but the incidents themselves? Are as unsurprising as you’d think.

I’ll summarise all the stories here into one amalgamated story, just to make things easier.

It’s a late afternoon karate class, filled with a fairly even mix of men and women. The sensei announces, “Okay guys, let’s do some sparring…”

“Are you okay?!” She feigns concern and pokes him in his back with her toe.

“I guess you should have been wearing a protective cup thing…” She laughs.

Waves of purest groin-agony crash over the boy‘s young adult body. Never before experienced intrusive thoughts suddenly assail him: Did I just lose a testicle? Will I still be able to have kids? Why is the pain getting worse? Will this pain ever stop? The periodic thud of nausea grows in his gut. Does he have to suddenly shit himself? So many suddenly new questions all brought about by this plucky black belt girl.

By now the other people in the class have stopped still and are staring, both men and women are trying hard not to laugh, but mostly women. Some men are wincing and likely having flashbacks of their own genitalia being kicked into their throats, perhaps even by this same menacing woman.

Emma is the testicle ringer, and maybe someone should have warned this new bolshy kid, but no one did and now his balls have paid the price for his cockiness.

Later, after resting and icing his bruised and tender balls, the boy begins to realise, he’s powerfully turned on. This crush of his, by “crushing” his balls to ruin, has only made him want her more. She’s not only unobtainable, she’s physically more powerful and skilled at fighting than he is. She was able to defeat his body in ways he clearly is unable to defend against. If she wanted to, at any time, she could turn him into a controlled pile of slime, clutching his balls and trying to keep his lunch down.

I’ve heard this story so many times from different karate boys and girls, it just sort of writes itself. Perhaps, if you’re into martial arts and you have your own personalised version of this story too. [Which I’d love to hear in the comments by the way].

But what is really going on in this story? We rarely ever hear this situation from the woman’s perspective. I can bet I know what she’s thinking. This woman is clearly, what I like to call, “a ballbuster in the wild.”

Here we have a cool woman who is perfectly at ease rocket-kicking a pair of testicles at absolute maximum velocity just because she can. What your dangly, loose and vulnerable testicles have unwittingly discovered is a suburban lady who has figured out how to indulge her nut-kicking hobby without any repercussions, nor does she have to put up with any of the typical sex-work nonsense that many of us are familiar with. It really is a win win scenario for her. And ya know what? Maybe she even kinda liked you and was flirting with you, although not necessarily. It could have been a completely platonic gonad strike, and that’s fine too. Just let savvy female ballbusters have their freedoms to do and express themselves however they want 😉

She saw you telegraphing that punch from a mile away and you left your swinging balls wide open to her sadistic indulgence. They were left so open that if she didn’t kick the crap out of them, she’d have been doing you a disservice. This ball attack from hell is actually her doing you a favour! Not only will you thence desperately attempt to keep your precious family jewels deeply out of foot range, you will have grown a new found respect for the effectiveness of a full-force ball strike! What boy doesn’t want to learn something new!?

While you’re on the floor, retching, crying, skin turning red, body going into spasms of pain radiating from your groin, what you really should be doing is saying, “Thank you so much Emma! For showing me the right way to treat a lady, with deference and respect. Bravo to you!”

Of course in reality they never thank ballbuster women at the time, so maybe they need someone to do it to them again!

If you have never been kicked in the testes by a martial arts lady, let me tell you, you’re definitely missing out.

But regardless of who has and who hasn’t been given a lesson in testicle retrieval, I think we can all agree that these brave women are doing a great job out there, wherever they are.