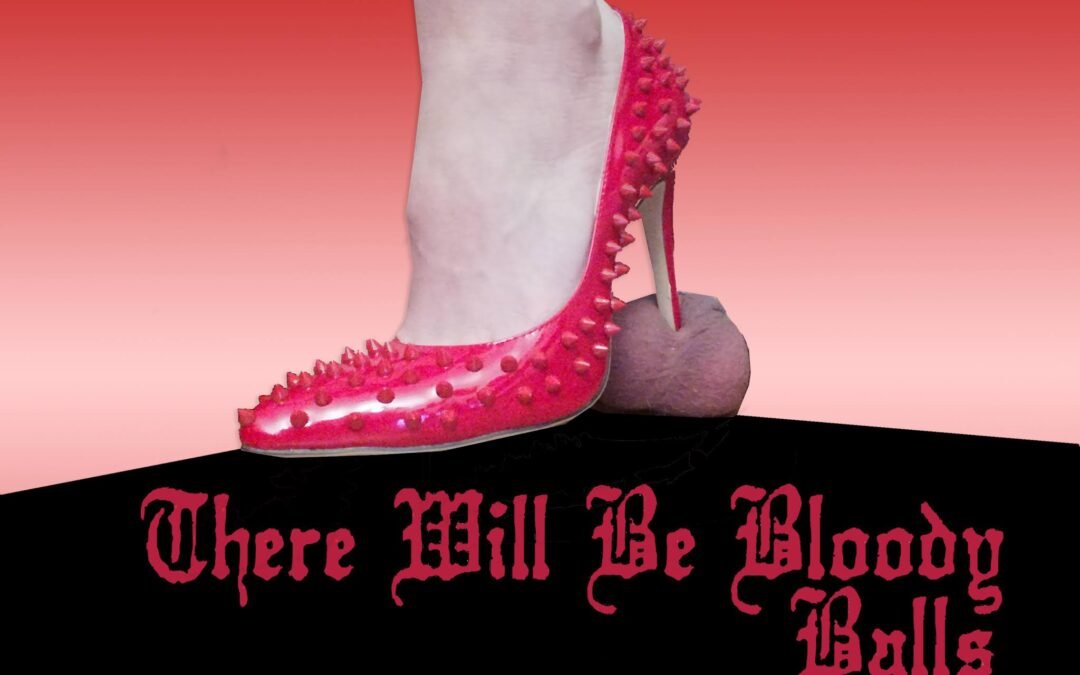 I’m a nice person. I like animals and the elderly, and I’m friends with my family and people I grew up with. I also think it’s bloody hilarious to kick a guy in the balls so hard that his body suddenly thinks its internal organs are being attacked and instantly makes his brain shut down. I don’t think those things are mutually exclusive.

Which is why when a guy online volunteered to let me kick his balls while wearing my razor sharp spikey red high heels, I kindly jumped at the opportunity!

Now I’ve smashed balls so hard they bled before, in fact on my Onlyfans that happens pretty regularly, like with my “Citrus Challenge” I caused some balls to bleed just by using a fucking grapefruit and that’s not sharp at all. Balls are so stupid that they can start bleeding if you smash them too hard, using any implement, I’ve discovered. I guess if you beat anything long or hard enough it’ll start bleeding and puny male testicles make no exception.

But my spikey red shoes are a special case indeed. They have been made and designed with hardcore ballbusting in mind. They were no doubt created and perfected by some genius woman somewhere.

Anyway, I did more than just make his scrotum skin bleed. By the end of the video he was moaning and crying and he had to sadly quit because he was in so much pain, particularly in his left ball which hung lower and therefore got battered the worst.

I don’t know if you’ve ever been kicked in the balls by a nice lady who is determined to put you on the ground, but let me assure you, she’ll hit your stupid testicles way harder than you’d imagine, without thinking twice.  I’ve done the research. I know what happens when your testicles get smashed into your pelvic bone. The balls compress in an instant and the pressure inside your gonads shoots through the roof. This sends messages racing up your spine that your body is experiencing an existential threat, it could lead to a loss of reproductive function, or worse! All the alarms go off and your stupid boy-body reacts by doing some of the dumbest shit ever. Your stomach hurts, you lose your balance, you feel like you have to take a dump. All the embarrassing stuff happens at once LOL. Your eyes first bulge out of your head, then they slam shut and start watering, making you look like a big crybaby. Your chin shoots up, exposing your Adam’s apple, and you crumple to the floor and curl up into a whimpering fetal position, and that’s just from one good kick or knee!

Every girl knows about this stuff almost instinctively. It’s pretty amazing to see in person and I never get tired of it. I totally recommend every woman to try it once in their lives. But I digress 😉

I literally met this guy while wearing my silky balconette red bra and a cute red tartan schoolgirl miniskirt. I was going for a red theme, I think you know why! I knew things were going to get a bit messy so I wasn’t going to wear white now was I?

We chatted a bit and I had him strip, he was very muscular, but a bit shorter than me in my high heels. He was also very pale for what was about to go down, which made me think of him as a blank canvas for me to “splatter” my work of art on 😉

From the very first kick he was shocked by the pain. He told me, “I think I’m going to start bleeding pretty quick…”. The fact of the matter is that just ONE normal super hard kick would be enough to get most men down on the ground rolling around. What’s so special about these spikey shoes? I’ll explain. When I kick you straight in your balls very hard, as I like to, the spikes along the instep of my foot are higher than all the rest.

My foot is less of a friendly human appendage, more of a medieval weapon of war! These very sharp shoe spikes come hurtling at your balls at speeds approaching 60MPH with all the weight of my very long leg behind it. Which makes it heavier than a bat and heavier than a spiked cudgel. SLAM! Straight into your innocent nude balls!

The conical spikes pierce your scrotum skin instantly, but then, as your ball gets crunched between my torture-shoe and your pelvic bone [the perfect kick], the spikes just keep on going. As the cone of the spike penetrates deeper, it spreads the hole in your ballskin wider and wider, as it now pierces the tunica albuginea, the tough fibrous outer covering of your testicle.  Finally the sharp tip of the spike breaches your inner nut sanctum and hits ball-spaghetti [seminiferous tubules]. Your testicles are now fully crushed and pierce with dozens of spikes in total. All in a fraction of a second. The bleeding begins immediately, and as I retract the razor cones from your gonads it creates a micro vacuum which sucks your stupid ball-spaghetti into your newly bruised scrotum. In a very real sense, a hard kick from one of these shoes suddenly creates perhaps dozens of tiny testicle ruptures [holes in your balls]. Each tiny hole in your tunica albuginea dramatically increases the likelihood of a sudden catastrophic testicle rupture by causing weakness in the fragile tissues. Yay!

But hey, wake up ballboi! Because that was just the first kick, you pussy! If I want this to be an interesting video you’d better believe I’m going to try to damage at least one of your balls! With your consent of course 😉

I proceed to kick his testicles from every angle I can logistically think of. Him on all-fours, him kneeling, standing face on, standing side on… After a few kicks, my foot is covered in his bl00d and who knows what else. As I approach the end of what feels like quite a long video, I notice his skewered kebab balls are kinda sticking to my shoe as I pull away.

That’s how deep I’m kicking those spikes into his precious family jewels. They’re puncturing his balls so deep I believe I have reached the deep inside of his nuts, the rete testis. This is the part of the testicle that transfers sperm from the testes to the epididymis. If you damage this bit, you’re going to have some problems with your ejaculate buddy!

This also gets me thinking, that studio floor is pretty grimy so I hope he’s got a good ball doctor lined up! If his boychik-nuggets get infected, he might just lose them entirely. But that’s SO not my problem.

By the end, he just can’t take any more. He says his left testicle feels destroyed, like it’s “had it” or something. I can tell that he wants more, but he physically can’t continue. He gets up and shows his completely ruined crotch to the camera. Then he hobbles off to clean himself up and have a nice relaxing coffee. All those sexy fantasies turned out to be not so sexy, right? Especially when I send him to the naughty corner to bash out some cum for me to examine. The semen on his sad looking paper towel is filled with fresh bl00d. This slaughter-cum would be totally ineffective if he needed to immediately impregnate someone, so I hope for his sake he wasn’t hoping to have children that day LOL.

Maybe his balls will heal, maybe they’ll get infected and have to be removed, but either way, these spikey shoes are awesome! I’m definitely going to be wearing them to the dancefloor and hope no boys are rude to me 😉

By the way, in case you didn’t know, if you don’t have any ballbusting toys, you’re missing out! It’s an exciting and fun way to introduce ballbusting to your relationship or even just to enhance your solo explorations!  www.ballbustingtoys.com