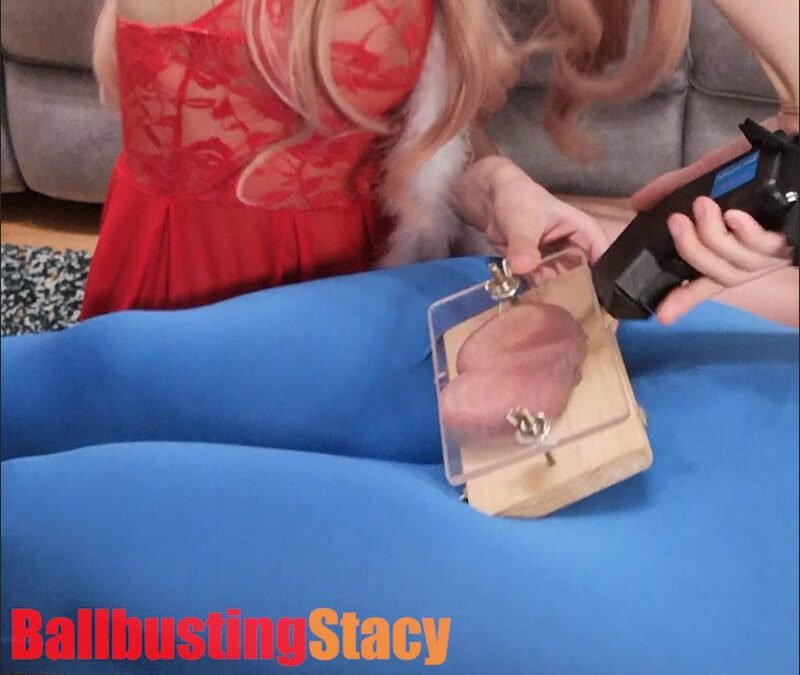 Sometimes it’s tricky to craft perfect new ballbusting videos. I have a certain style in the way I like to cause maximum testicle pain, all the while keeping it fun and exciting. You could say that I like to push the envelope.

For most boys however, just a hard finger flick is enough to ruin their day. Then you have the boys who need a solid punch in the balls and they’re out. Other boys are complete newbies and if he doesn’t make any specific requests I’ll just immediately kick his testicles hard, causing him to instantly fall down to the ground. They always try their hardest to recover for 5-10 minutes before ultimately quitting, stating it’s “too painful”.

If I filmed these kinda events, it would be for some kinda boring viewing. You’d just see a guy on the floor looking all pathetic and me getting more and more bored waiting for him to recover LOL, so the idea is to create videos that are entertaining, and with an experimental element of “What’s going to happen?” because we try lots of new things together on camera, and find out! 😊

This last Christmas an opportunity presented itself, with a clearly half ball-mad submissive boy suggested I do whatever I like with his balls, which is always a good start.

I’ve tasered balls before, and I’ve elastrated balls before, and I’ve viced balls so hard and for so long that I was a little concerned that they’d died (not that I care too much, that’s more of a “you” problem). But these were all individual ballbusting experiments… I’d never done all three of those things at once! And why not?! Because I thought each tool was quite risky in itself. Tasered balls could get burnt or damaged internally, elastrated balls can quickly damage if their blood supply is restricted for too long, and viced balls could rupture/fracture or have blood supply issues also.

But one day I just thought “Fuck it”

The next day I thought, “What’s the best way to do this?”

So I thought up the perfect order, when I explain it you’ll see it makes sense.

First I band the balls with the super tiny, rubber elastrator band.

In case you don’t know, an elastrator is a tool used to “harmlessly” castrate farm animals. The great thing about it is it cuts off the blood supply super easily, which immobilises the unfortunate male animal. Even a human can’t remove the bands without a knife.

The castration process happens quite fast, so you have to be quick. You have perhaps half an hour maximum before the testicles are potentially dead and even then it’s possible that the delicate teste cords might sustain catastrophic damage. During that time, before they start to go numb forever, they get more and more painful with a throbbing, insistent pain similar to that which you feel in your lungs when you hold your breath, but in your balls. Your boy-mind starts to cloud over in a panic as your body instinctively realises it’s losing its precious manhood.

After 30 minutes, the cells inside the testicles use up all the oxygen floating around in your worthless sac. Also, to look at it another way, it gives me half an hour to beat the fuck out of them before they start going numb. Luckily the elastrator keeps the balls together nice and tight so they can’t flop all over the place while I’m beating them!

Don’t worry, I handcuffed the boy’s hands behind his back so he couldn’t take anything off, even if he was desperate. He’s completely at my mercy.

I beat his balls with some hard punches and slaps to get them a bit swollen and wake them up some. He’s being a bit loud, so I cover his face with a pillow.

The clock is ticking while his balls are banded, but I get lost in the moment of enjoying doing whatever I want to him. It’s nice having a set of balls you can torture, I recommend it to every girl.

Next I place his balls into a wooden vise.

The cool thing about this vice is that it has clear plastic on one side so I can see his balls getting more and more crushed. Normally I like to crush them so they’re flat, like big white and purple pancakes, but the elastrator is fighting against the vice and their shape isn’t deforming like usual. I try to crush the balls even harder than normal but they’re just not getting as flat as I’d like.

I put my hand on the vice and push it down with all my weight to try to get the balls even flatter, but they’re super firm because of the elastrator. Still, they’re under so much pressure they’re sticking out the sides of the vice and they’re hard to touch. Instead of squishy balls, they feel more like vulcanised rubber. Like a hockey puck or something. They have absolutely no give to them, which I guess will do.

I poke and flick them with my fingers, as hard as possible. Remember when I said for most boys, just a flick is enough? Well a flick is enough now to send spasms of back-arching pain through this stupid slave, as his testicle cords are squeezed shut and his eggs flattened. He screams impotently into my pillow.

Well, I’m starting to get a bit bored flicking his pressured balls. So…

Next I zap his balls with a cattle prod/taser.

When you get zapped by electricity, the tissues in your body offers very little resistance to the electrons flowing through them. That pain is every neuron the electrons touch, telling your brain how unpleasant it is to be a conductor of electricity. It’s also potentially damaging your cells at a microscopic level, so those neurons are screaming at your brain, MAKE THIS STOP!

When nerves are affected by an electric shock, the consequences include severe pain, tingling, numbness, and difficulty moving. Depending on how large the shock is, the pain and effects can travel all the way through the body. However it is most intense at the point of contact. The effects of the shock might clear up in time, or they may be permanent, I guess you just have to take a chance and hope for the best.

I jammed the cattle prod/taser into the heart of his dumb, oxygen starved, under pressure balls and pulled the trigger, sending 4000 volts into his body through his testes. He jerked and screamed, and screamed and screamed. I was laughing my head off, but seriously boy, shut up, you’re embarrassing yourself.

How many times did I zap his balls? I forget, but it was many times. The air in the room smelled like ozone and burning when I was done.

I had forgot to set a timer at the beginning so I had no idea how long I’d been playing with his nuts by now. Whoops! So, I decided to release him.

I couldn’t be bothered to deal with taking off the elastrator band, since that’s kind of difficult and I’d rather him accidentally cut his balls with the scissors than me.

His balls were in excruciating pain for 3 days. He nearly went to the hospital but he decided against it because he was afraid of their reaction. The pain started to subside on day 4, but he still had a weird, “fuzzy” feelings at the points of contact. Also the muscles in his groin would spasm occasionally for the next two weeks. He said it woke him up at night once. At one point at his work office, the muscle that is supposed to regulate the descent and ascent of his testicles to regulate temperature, the cremaster muscle, was spasming and his testicle was bouncing up and down like a bouncy ball. He texted me on twitter and I told him to punch it very hard.  He did so, and it didn’t fix it, but at least he was in a lot of pain again. His balls were more or less back to normal after a month.